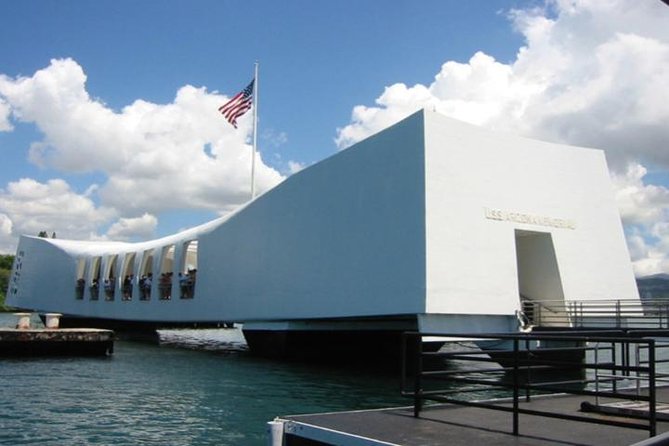 This unique tour allows you to see the full history in a small group of all the world war history from Pearl Harbor Tour, Battleship Row, USS Bowfin submarine, The USS Missouri, downtown Honolulu and view notable attractions such as the Iolani Palace, King Kamehameha Statue, and Punchbowl National Cemetery of the Pacific. This is a popular tour fro cruise guests and really adds to the experience by travelling in a smaller group than the cruise lines.

ItineraryThis is a typical itinerary for this productStop At: Pearl Harbor / WW II Valor in the Pacific National Monument, Honolulu, Oahu, HawaiiNational Park Rangers, who will show you a 23-minute historical film with authentic footage of the Pearl Harbor attack. From the theater you will be taken to the Arizona Memorial aboard a Navy shuttle. At the Arizona Memorial, visit the Shrine Room and reflect on the names of the 1,177 men resting aboard the sunken battleship below. And be sure to peer down at the actual battleship wreckage along with the "black tears of the Arizona," oil that still leaks from the vessel more than 70 years after its sinking.Duration: 2 hoursPass By: Honolua Bay, Maui, HawaiiYou will tour downtown Honolulu. Learn and view notable attractions such as the Iolani Palace, King Kamehameha Statue, and Punchbowl National Cemetery of the Pacific.Stop At: USS Arizona Memorial, Honolulu, Oahu, Hawaii Tour back through history to the deck of the USS Missouri, where the Japanese surrendered in Tokyo Bay and a peace treaty ending WWII was signed. See the dent caused by a Kamikaze plane as it nearly destroyed this famous warship.Duration: 40 minutes