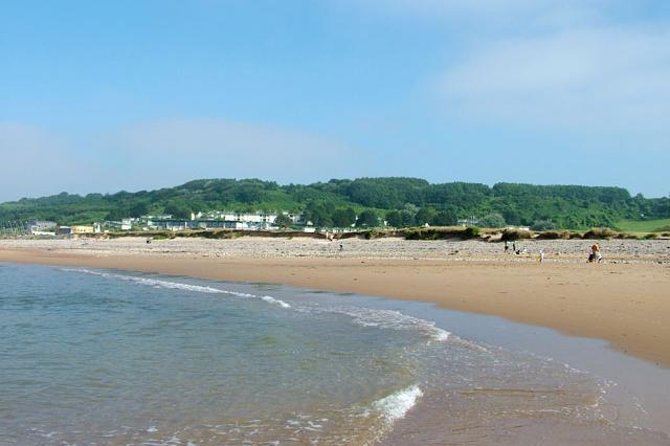 Visit the American D-Day sites where the greatest amphibious landing in history took place during World War II, on this 9-hour Normandy Battlefields Tour from Bayeux. See famous sites with a guide including Utah Beach, Omaha Beach, the German and American cemeteries, the Airborne Museum of Sainte-Mère-Eglise and much more. Your minivan holds a maximum of eight passengers, and a small-group tour is the perfect way to get to out-of-the-way places in one day.

Begin your tour with a visit to the Sainte-Mère Church and Airborne Museum, the site of a massive airborne operation involving 15,000 U.S. paratroopers during World War II. Hear from your knowledgeable guide how the brave soldiers descended from the skies on the night before D-Day and learn the incredible story of Private John Steele, one of the paratroopers.Continue onward to Utah Beach, where soldiers of the 4th Infantry Division leapt from their landing crafts and headed inland under the orders of General Theodore Roosevelt, Jr. The first day of battle saw relatively few casualties, but the same cannot be said for those that followed.Visit the German Cemetery, the largest in Normandy dedicated to German casualties of war and the place where over 21,000 fallen soldiers are laid to rest. Spend time at Pointe du Hoc, one of the very largest German coastal batteries. The guns located here rained shells down on Allied soldiers across Omaha and Utah beaches, and the job of silencing them fell to a certain Lt. Col. Rudder and the U.S. Rangers of the 2nd Battalion.Spend time on Omaha Beach, widely considered the most famous of the D-Day landing beaches. Gain an insight into the challenge faced by the Allied forces landing here under heavy German fire, and take time to consider their extraordinary courage.The last stop on your tour is the American Cemetery and Visitor Center, the final resting place of 9,387 U.S. soldiers. The cemetery overlooks Omaha Beach and honors soldiers of all ranks in equal measure. Spend time walking among the marked graves and consider this fitting tribute to those who never made it home after World War II.After nine hours discovering the Normandy battlefields, travel back to Bayeaux where your tour will come to an end.