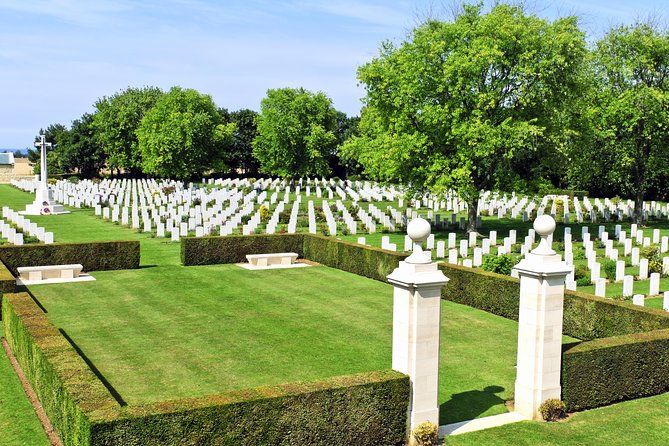 Hear the story of World War II from a different perspective on this tour of Normandy’s Canadian war sites. Rather than focusing on the American and British roles, this unique tour reveals the lesser-known history of Canada’s involvement in the liberation of Europe. Learn about the sacrifices of Canadian soldiers at the Juno Beach Centre, visit the final resting place of thousands of Canadian soldiers at the Bény-sur-Mer Canadian War Cemetery, and hear about the tragic Canadian massacre at Ardenne Abbey. Your guide will provide fascinating commentary throughout this insightful and moving tour.Numbers are limited to eight people on this small-group tour, ensuring a more personalized experience.

You’ll be picked up from your hotel or a meeting point in Bayeux in the afternoon for your half-day tour of Normandy’s Canadian World War II sites. Travel 30 minutes to the coast to your first stop, the Juno Beach Centre, located just behind the sand dunes of Juno Beach.First opened in 2003 by a D-Day veteran, Garth Webb, the Juno Beach Centre is the only museum in Normandy dedicated to Canada’s role in WWII. On your visit here, learn about the role the Canadian Army played in the war and commemorate the contributions and sacrifices these soldiers made during the liberation of France and the rest of Europe. Surrounding the museum you’ll see German bunkers and beach obstacles, Canadian and Allied military equipment, and historic monuments and sculptures.Your next stop is the Bény-sur-Mer Canadian War Cemetery, near where the Third Canadian Division landed. Beautifully situated on a hill overlooking the Atlantic coast, this cemetery is the final resting place of more than 2,000 Canadian, British and French soldiers, including the 359 Canadians killed on D-Day.Continue to Ardenne Abbey, a masterpiece of Norman architectural design dating from the 12th century. Your guide will explain the troublesome history of the abbey, starting with the early years of the German occupation when it was a focal point for the local French Resistance. It was then taken over by Colonel Kurt Meyer’s regiment of the 12th SS Hitler’s Youth division. In June 1944, 20 Canadian soldiers were illegally executed here. The abbey was liberated a month later as the Canadians reached the city of Caen, and in 1945 Meyer was tried by Canadian Military Court and found guilty of war crimes.After your time at Ardenne Abbey, relax and reflect on the drive back to Bayeux.Please note: Due to special events taking place to commemorate the 70th anniversary of the D-Day landings, this tour may be amended on June 5, 6 and 7, 2014. It may not be possible to access the beaches, in which case alternative sites will be included instead.