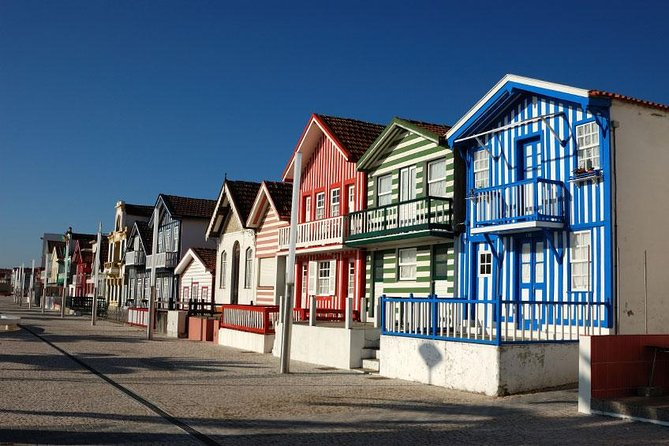 Glimpse the seaside city of Aveiro, traditionally known for the production of tiles and ceramic as well as for it's economical activities related with the ocean, such as fishing, salt production and ship construction. Visit the beach area to find the famous coloured stripped houses and the biggest Portuguese lighthouse. Follow to the city center to appreciate the fish market, enjoying a river cruise on a Moliceiro (typical local boat) and taste the Ovos Moles (traditional sweets). Continue next to Coimbra, an hystorical city, where lunch takes place. Let yourself be conduced on a walking tour through the old town while you learn about the Portuguese history. At last but not least pay a visit to the University of Coimbra, the first in Portugal, dated from the 16th century.

In this tour you start to visit the city of Aveiro, the so called "Portuguese Venice", name given because of the seawater channels that flood the city center. Once in Aveiro the tour goes to Costa Nova, by the seaside, where you can appreciate the typical fishermen houses full of colored stripes. Next you will visit Barra's beach. Here you will learn about the influence of the sea over the population of Aveiro during the 17th and the 18th century. Following that, we will take you to visit the city center, where you will see the 15th century cathedral, the old train station with it's 19th-century portuguese tiles and the fish market. To finish, you will take a boat tour at the city channels on a typical "moliceiro" boat. After lunch, the tour continues towards the "city of knowledge", Coimbra. This historical city was the birthplace of six Portuguese kings and the capital of Portugal. Visit the first Portuguese university from the 13th-century, and walk on the narrow streets of the medieval city center. Here, visit the 12th century Santa Cruz church, where is placed the tomb of the first Portuguese king. Moreover, meet Café of Santa Cruz (in the place of a former gothic church), Mosteiro of Santa Clara a Velha and Portugal dos Pequeninos. Come and enjoy the mixture of nature and history!