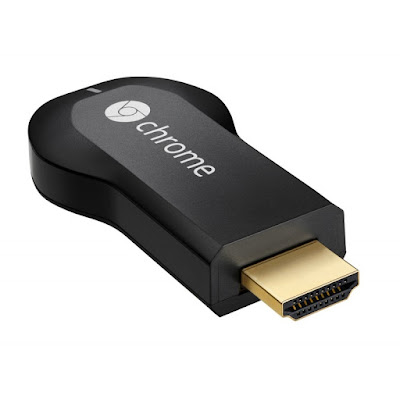 Required points:
650
Redeem now
Chromecast is the easy way to enjoy online video and anything from the web on your TV. Plug it into any HDTV and control it with your existing smartphone, tablet, or laptop. Send your favorites from HBO GO, Netflix, YouTube, Hulu Plus, Pandora, Watch ESPN, Crunchyroll, MLS, Crackle, Rdio, MLB.TV, Google Play Movies & TV, Google Play Music, and Chrome to your TV with the press of a button. No more huddling around small screens and tiny speakers. Chromecast automatically updates to work with a growing number of apps.

Chromecast works with devices you already own, including Android tablets and smartphones, iPhones, iPads, Mac and Windows laptops, and Chromebooks. Browse for what to watch, control playback, and adjust volume using your smartphone, tablet, or laptop. You won't have to learn anything new.

What video formats work with casting a tab from Chrome?
Almost every video you can view in your Chrome browser should work, including Flash videos. Video formats that require other plugins, such as Silverlight and Quicktime, may not work.
Does tab casting work with Amazon Prime Streaming / Amazon Instant Video?
Tab projection for Amazon Prime Streaming and Amazon Instant Video will not work when using Silverlight plugin for streaming.

Is a remote supplied with my Chromecast?
Chromecast works with devices you already own, including Android tablets and smarphones, iPhones, iPads, Chrome for Mac, and Chrome for Windows. Browse for what to watch, control playback, and adjust volumes using your device. You won't have to learn anything new.

Can I stream photos and videos stored on my computer to my TV?
You can stream content that is shown within Chrome for Mac and Chrome for Windows.

Can I cast a tab from Chrome on smartphones and tablets to my TV?
Currently Chromecast does not support casting a Chrome tab from smartphones or tablets.

Can I bring Chromecast with me to another country?
This version of the Chromecast is only supported in the United States. Other versions are available for sale internationally.
You don't have enough points